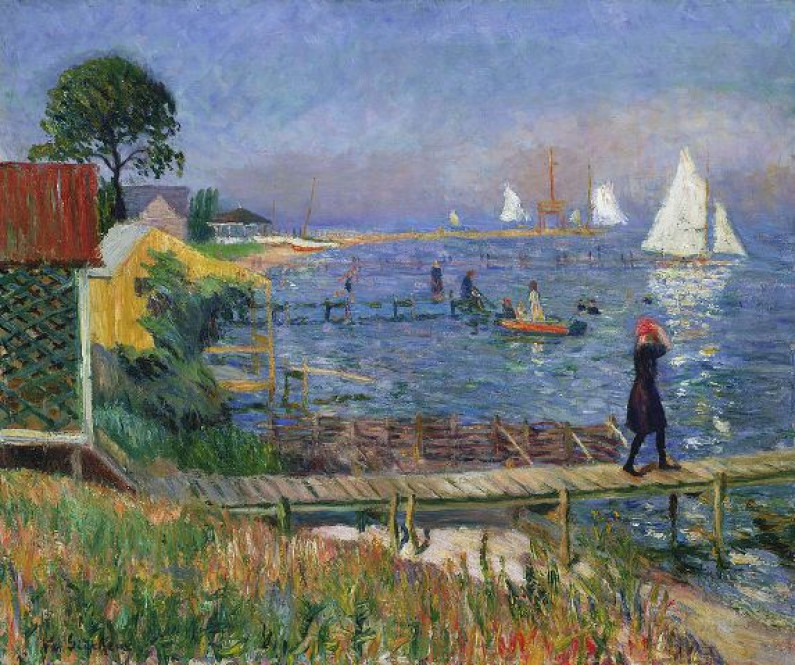 William James Glackens (March 13, 1870 – May 22, 1938) was an American realist painter and one of the founders of the Ashcan School of American art.

He is also known for his work in helping Albert C. Barnes to acquire the European paintings that form the nucleus of the famed Barnes Foundation in Philadelphia. His dark-hued, vibrantly painted street scenes and depictions of daily life in pre-WW I New York and Paris first established his reputation as a major artist.

His later work was brighter in tone and showed the strong influence of Renoir. During much of his career as a painter, Glackens also worked as an illustrator for newspapers and magazines in Philadelphia and New York City.

Glackens was born in Philadelphia, Pennsylvania, where his family had lived for many generations. William had two siblings: an older sister, Ada, and an older brother, cartoonist and illustrator Louis Glackens. He graduated from the prestigious Central High School in 1890. Throughout his school years, he showed a great interest in and aptitude for drawing and drafting.

Newspaper illustration and transition into painting

After graduation, Glackens became an artist-reporter for The Philadelphia Record. In 1892, he left that newspaper and began illustrating for the Philadelphia Press. He enrolled in evening classes at the Pennsylvania Academy of the Fine Arts, studying under the renowned realist Thomas Anshutz.

Glackens was not a steady pupil, as art critic Forbes Watson would observe in 1923: “So much impression did the various instructors make upon him that today he can hardly remember who taught there when he was a pupil.” John Sloan also attended the Academy, and he introduced Glackens to Robert Henri, a talented painter and charismatic figure in Philadelphia art circles.

Henri played host to regular artists’ gatherings at his studio, occasions to socialize, drink, sketch, talk about art, and give artistic criticism of one another’s work. Henri urged the young men he brought together to read Whitman and Emerson, William Morris Hunt’s Talks on Art and George Moore’s Modern Painting and to think about the need to create a vigorous new American art that spoke to their time and experience.

These gatherings were the inspirational beginning of what became known as the Ashcan school of American art, a style that rejected the formality and gentility of 19th-century academic art and looked to working-class and middle-class metropolitan life for its material.