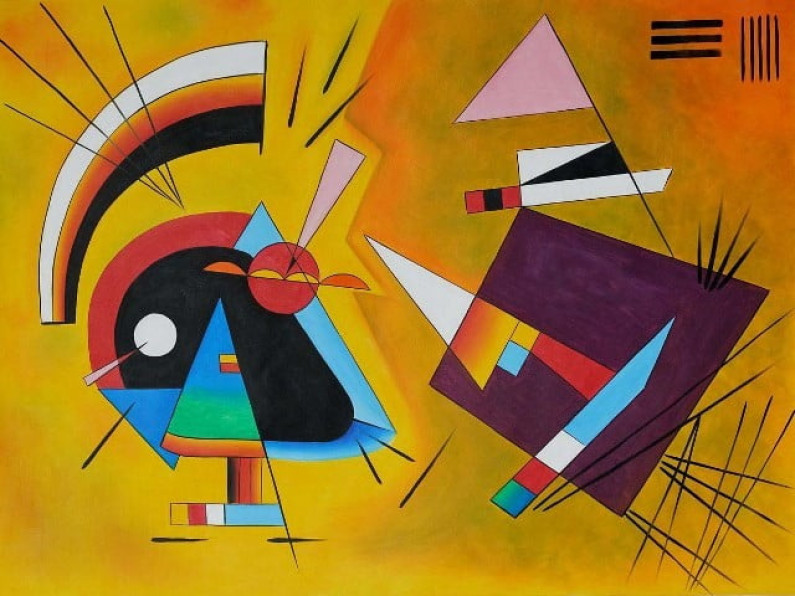 Wassily (Vasily) Wassilyevich Kandinsky was born in 1866 in Moscow to well educated, upper-class parents of mixed ethnic origins. His father was born close to Mongolia, while his mother was a Muscovite, and his grandmother was from the German-speaking Baltic.

The bulk of Kandinsky’s childhood was spent in Odessa, a thriving, cosmopolitan city populated by Western Europeans, Mediterraneans, and a variety of other ethnic groups. At an early age, Kandinsky exhibited an extraordinary sensitivity toward the stimuli of sounds, words, and colors.

His father encouraged his unique and precocious gift for the arts and enrolled him in private drawing classes, as well as piano and cello lessons.

Despite early exposure to the arts, Kandinsky did not turn to painting until he reached the age of 30. Instead, he entered the University of Moscow in 1886 to study law, ethnography, and economics.

In spite of the legal focus of his academic pursuits, Kandinsky’s interest in color symbolism and its effect on the human psyche grew throughout his time in Moscow.

In particular, an ethnographic research trip in 1889 to the region of Vologda, in northwest Russia, sparked an interest in folk art that Kandinsky carried with him throughout his career. After completing his degree in 1892, he started his career in law education by lecturing at the university.

Despite his success as an educator, Kandinsky abandoned his career teaching law to attend art school in Munich in 1896. For his first two years in Munich he studied at the art school of Anton Azbe, and in 1900 he studied under Franz von Stuck at the Academy of Fine Arts.

At Azbe’s school he met co-conspirators such as Alexei Jawlensky, who introduced Kandinsky to the artistic avant-garde in Munich. In 1901, along with three other young artists, Kandinsky co-founded “Phalanx” – an artist’s association opposed to the conservative views of the traditional art institutions.

Phalanx expanded to include an art school, in which Kandinsky taught, and an exhibitions group. In one of his classes at the Phalanx School, he met and began a relationship with his student, Gabriele Munter, who became his companion for the next 15 years.

As he traveled throughout Europe and northern Africa with Munter from 1903 until 1909, Kandinsky familiarized himself with the growing Expressionist movement and developed his own style based on the diverse artistic sources he witnessed on his travels.