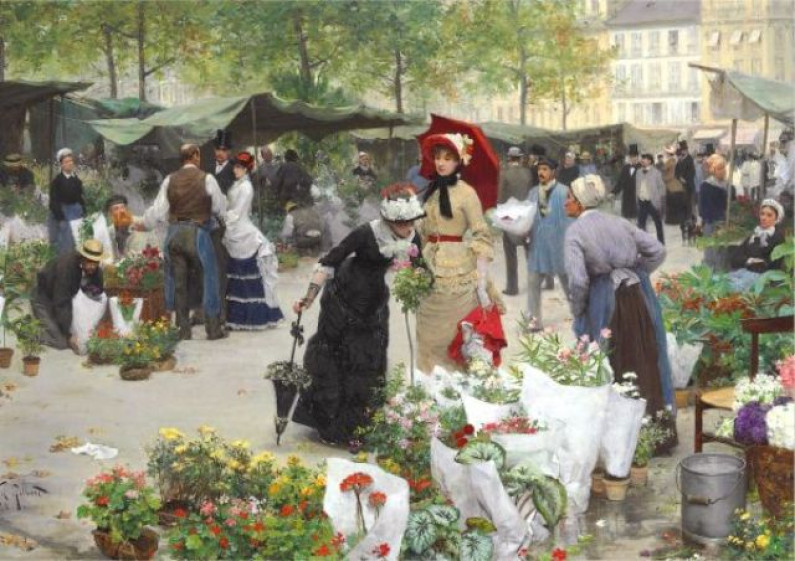 Victor Gabriel Gilbert was a French painter of genre scenes. He received his formal training from L. Em. Adan, Levasseur and Ch. Busson.

In 1873 he had his debut at the Paris Salon and continued to be a faithful exhibitor at the Salon des Artist Francais where he obtained a silver medal in 1889, received the Bonnet Prize in 1926 and the Knight of the Legion of Honour in 1897.

He was highly respected for his fine detailed work and was considered an inspiration to many artists. His views of the colourful Parisian life, the boulevards, cafés and flower stalls became well known. At the same time he turned his effect on the portrayal of adorable children, accomplishing a sensibility and great harmony towards his subject.

It was during the mid 1870s that Gilbert became a close friend to Pierre Martin, one of the principal supporters of the impressionist movement and Victor Gilbert’s paintings secured a place amongst his collection of Impressionists like Monet, van Gogh, Cezanne and Gauguin.

Victor Gilbert’s paintings were not only well sought after in France, he also exhibited in 1883 in Munich, 1894 in Vienna and he was a great success in London in 1908. Today his work can be viewed in the Museums of Bayeux, Besançon, Bordeaux, Dieppe, le Havre, Lille, Liége, Nice and Strassbourg.