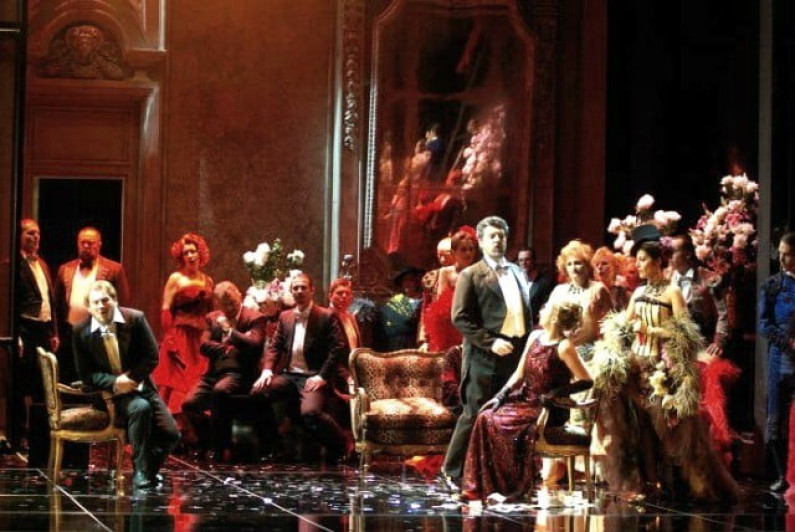 La traviata (Italian: The Fallen Woman) is an opera in three acts by Giuseppe Verdi set to an Italian libretto by Francesco Maria Piave. It is based on La dame aux Camélias (1852), a play adapted from the novel by Alexandre Dumas, fils. The opera was originally entitled Violetta, after the main character. It was first performed on 6 March 1853 at the La Fenice opera house in Venice.

Piave and Verdi wanted to follow Dumas in giving the opera a contemporary setting, but the authorities at La Fenice insisted that it be set in the past, “c. 1700”.

It was not until the 1880s that the composer and librettist’s original wishes were carried out and “realistic” productions were staged.

For Verdi, the years 1851 to 1853 were filled with operatic activity. First, he had agreed with the librettist Salvadore Cammarano on a subject for what would become Il trovatore, but work on this opera could not proceed while the composer was writing Rigoletto, which premiered in Venice in March 1851.

In addition, personal affairs in his home town limited his activities that spring, but after Rigoletto’s success in Venice, an additional commission was offered by Brenna, the secretary of La Fenice.

After Verdi’s return from Paris a contract was signed in May 1852, with performances scheduled for March 1853, although no subject was chosen at that time.

Verdi sees The Lady of the Camellias play

Verdi and Giuseppina Strepponi had visited Paris from late 1851 and into March 1852. In February the couple attended a performance of Alexander Dumas fils’s The Lady of the Camellias.

As a result of this, Verdi biographer Mary Jane Phillips-Matz reports, the composer immediately began to compose music for what would later become La traviata.