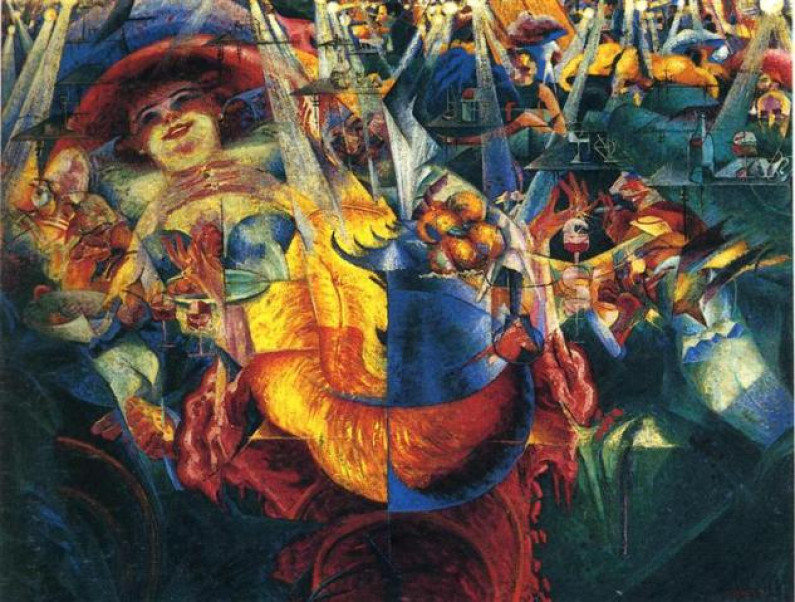 Umberto Boccioni (19 October 1882 – 17 August 1916) was an influential Italian painter and sculptor. He helped shape the revolutionary aesthetic of the Futurism movement as one of its principal figures.

Despite his short life, his approach to the dynamism of form and the deconstruction of solid mass guided artists long after his death.His works are held by many public art museums, and in 1988 the Metropolitan Museum of Art in New York City organized a major retrospective of 100 pieces.

Umberto Boccioni was born on 19 October 1882 in Reggio Calabria. His father was a minor government employee, originally from the Romagna region in the north and his job included frequent reassignments throughout Italy.

The family soon relocated further north, and Umberto and his older sister Amelia grew up in Forlì (Emilia-Romagna), Genoa and finally Padua.

At the age of 15, in 1897, Umberto and his father moved to Catania, Sicily, where he would finish school. Some time after 1898, he moved to Rome and studied art at the Scuola Libera del Nudo of the Accademia di Belle Arti di Roma.

The little known about his years in Rome is found in the autobiography of his friend Gino Severini (1883–1966), who recalled their meeting in 1901 and mutual interest in Nietzsche, rebellion, life experiences and socialism.

Boccioni’s writings at this time already express the combination of outrage and irony that would become a lifelong characteristic. His critical and rebellious nature, and overall intellectual ability, would contribute substantially to the development of the Futurism movement.

After building a foundation of skills, having studied the classics through Impressionism, both he and Severini became students of Giacomo Balla (1871–1958), a painter focusing on the modern Divisionist technique, painting with divided rather than mixed color and breaking the painted surface into a field of stippled dots and stripes. Severini wrote “It was a great stroke of luck for us to meet such a man, whose direction was decisive of all our careers.

In 1906, he briefly moved to Paris, where he studied Impressionist and Post-Impressionist styles, before visiting Russia for three months, getting a first-hand view of the civil unrest and governmental crackdowns.

Returning to Italy in 1907, he briefly took drawing classes at the Accademia di Belle Arti of Venice. He had first visited the Famiglia Artistica, a society for artists in Milan, in 1901.

Boccioni moved to Milan in 1907. There, early in 1908, he met the Divisionist painter Gaetano Previati. In early 1910 he met Filippo Tommaso Marinetti, who had already published his Manifesto del Futurismo (“Manifesto of Futurism”) in the previous year.

On 11 February 1910 Boccioni, with Balla, Carlo Carrà, Luigi Russolo and Severini, signed the Manifesto dei pittori futuristi (“Manifesto of Futurist painters”), and on 8 March he read the manifesto at the Politeama Chiarella theatre in Turin.

Boccioni became the main theorist of the artistic movement. “Only when Boccioni, Severini and a few other Futurists traveled to Paris and saw what Braque and Picasso had been doing did the movement begin to take real shape.”