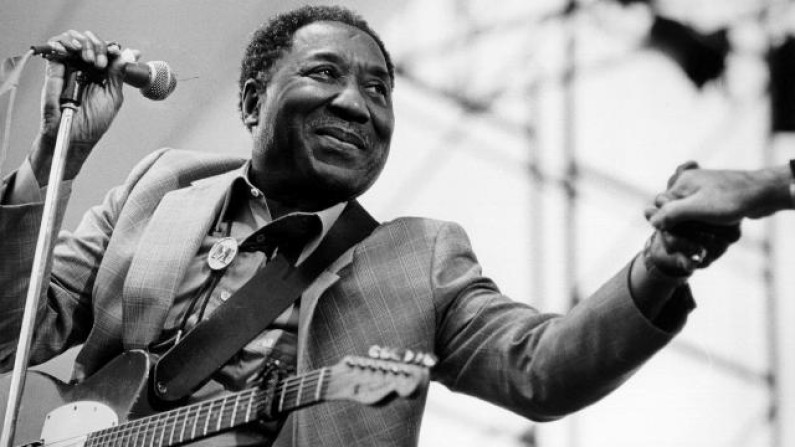 McKinley Morganfield (April 4, 1913 – April 30, 1983), better known by his stage name Muddy Waters, was an American blues musician. He is considered the “father of modern Chicago blues”.

Muddy Waters grew up on Stovall Plantation near Clarksdale, Mississippi and by age seventeen was playing the guitar at parties, emulating local blues artists Son House and Robert Johnson.

He was recorded by Alan Lomax there for the Library of Congress in 1941. In 1943, he headed to Chicago with the hope of becoming a full-time professional musician, eventually recording, in 1946, for first Columbia and then Aristocrat Records, a newly formed label run by brothers Leonard and Phil Chess.

In the early 1950s, Muddy and his band, Little Walter Jacobs on harmonica, Jimmy Rogers on guitar, Elgin Evans on drums and Otis Spann on piano, recorded a series of blues classics, some with bassist/songwriter Willie Dixon, including “Hoochie Coochie Man”, “I Just Want to Make Love to You” and “I’m Ready”.

In 1958, Muddy headed to England, helping to lay the foundations of the subsequent blues boom there, and in 1960 performed at the Newport Jazz Festival, recorded and released as his first live album, At Newport 1960.

Muddy’s influence is tremendous, not just on blues and rhythm and blues but on rock ‘n’ roll, hard rock, folk, jazz, and country; his use of amplification is often cited as the link between Delta Blues and Rock ‘N’ Roll.

Muddy’s long-time wife Geneva died of cancer on March 15, 1973. A devastated Muddy was taken to a doctor and told to quit smoking, which he did. Gaining custody of some of his “outside kids”, he moved them into his home, eventually buying a new house in Westmont, Illinois.

Another teenage daughter turned up while Muddy was on tour in New Orleans; Big Bill Morganfield was introduced to his Dad after a gig in Florida. Florida was also where Muddy met his future wife, the 19-year-old Marva Jean Brooks whom he nicknamed “Sunshine”. Eric Clapton served as best man at their wedding in 1979.

On November 25, 1976, Muddy Waters performed at The Band’s farewell concert at Winterland in San Francisco. The concert was released as both a record and a film, The Last Waltz, featuring a performance of “Mannish Boy” with Paul Butterfield on harmonica.