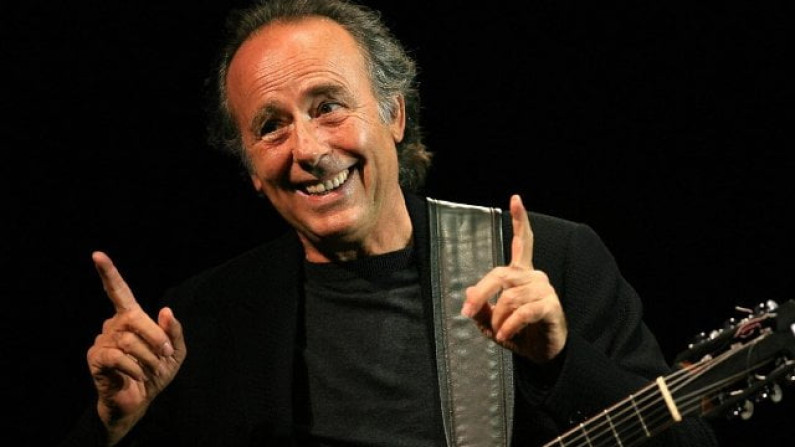 Joan Manuel Serrat i Teresa (27 December 1943) is a Spanish musician, singer-songwriter, recording artist, and performer. He is considered one of the most important figures of modern, popular music in both the Spanish and Catalan languages.

He has also recorded songs by Violeta Parra and Víctor Jara. Serrat was one of the pioneers of what is known in Catalan as “Nova Cançó”. Joan Manuel Serrat is also known by the names “El noi del Poble-sec” and “El Nano”.

Childhood
Joan Manuel Serrat i Teresa was born 27 December 1943 in the Poble-sec neighbourhood of Barcelona, to members of a working family.

His father, Josep Serrat, was a Spanish anarchist affiliated with the CNT and his mother, Ángeles Teresa, the woman of the home was from Belchite, Zaragoza.

His childhood and environment in his neighbourhood greatly impacted him, as a great number of his songs described Catalonia after the Spanish Civil War (examples are “La Carmeta”, “La tieta” y “El drapaire” as stereotypical characters from his neighbourhood).

Serrat became involved with music at the age of 17 when he obtained his first guitar to which he dedicated one of his earliest songs, “Una guitarra”. In the early 1960s, the young artist participated in a pop band, playing along with classmates at Barcelona’s Agronomy School and performing mainly Beatles songs and Italian ‘pop-of-the-era’ songs translated to Spanish.

In 1965, while singing in a radio show called Radioscope, host Salvador Escamilla helped him secure a record deal with local label Edigsa, from there joining the group Els Setze Jutges which defended the Catalan language during the Franco dictatorship.