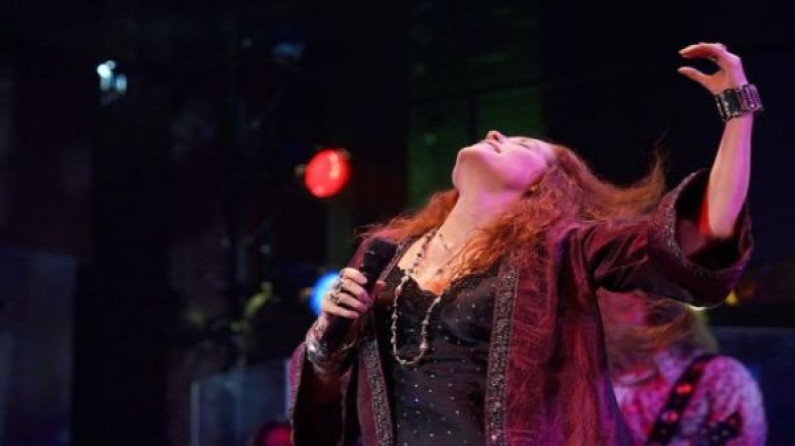 Janis Joplin  (January 19, 1943 – October 4, 1970) was an American singer-songwriter who first rose to fame in the late 1960s as the lead singer of the psychedelic-acid rock band Big Brother and the Holding Company, and later as a solo artist with her own backing groups, The Kozmic Blues Band and The Full Tilt Boogie Band.

Her first ever large scale public performance was at the Monterey Pop Festival; this led her to becoming very popular and one of the major attractions at the Woodstock festival and the Festival Express train tour.

Joplin was well known for her performing abilities. Her fans referred to her stage presence as “electric”; at the height of her career, she was known as “The Queen of Psychedelic Soul”.

Known as “Pearl” among her friends, she was also a painter, dancer and music arranger. Rolling Stone ranked Joplin number 46 on its list of the 100 Greatest Artists of All Time in 2004, and number 28 on its 2008 list of 100 Greatest Singers of All Time. She was inducted into the Rock and Roll Hall of Fame in 1995.

Cultivating a rebellious manner, Joplin styled herself in part after her female blues heroines and, in part, after the Beat poets. Her first song recorded on tape, at the home of a fellow University of Texas student in December 1962, was “What Good Can Drinkin’ Do”.

She left Texas for San Francisco (“just to get away from Texas”, she said, “because my head was in a much different place”) in January 1963, living in North Beach and later Haight-Ashbury. In 1964, Joplin and future Jefferson Airplane guitarist Jorma Kaukonen recorded a number of blues standards, further accompanied by Margareta Kaukonen on typewriter (as a percussion instrument).

This session included seven tracks: “Typewriter Talk”, “Trouble in Mind”, “Kansas City Blues”, “Hesitation Blues”, “Nobody Knows You When You’re Down and Out”, “Daddy, Daddy, Daddy” and “Long Black Train Blues”, and was later released as the bootleg album The Typewriter Tape.