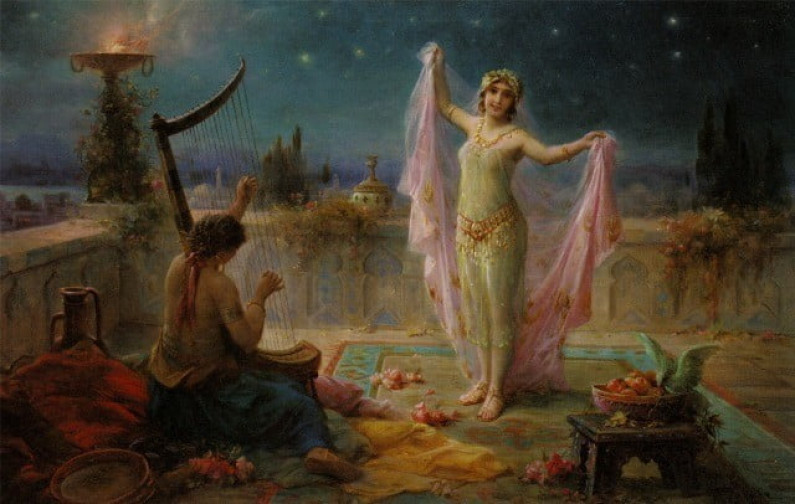 Hans Zatzka (8 March 1859 – 17 December 1945 (or 1949) was an Austrian Academic and fantasy painter. He has sometimes been known as P. Ronsard,[Pierre de Ronsard or H. Zabateri and had signed many of his works as Joseph Bernard, J. Bernard, or Bernard Zatzka.

The purpose of Zatzka’s vast array of pseudonyms was to avoid penalties of breaking contracts which limited the amount of artwork he could sell. This has caused some art databases to conflate Zatzka’s work under the pseudonym Joseph Bernard with the French sculptor with the same name.

Hans Zatzka was born on 8 March 1859 in Vienna. His father was a construction worker, and his mother was the actress Hilde Sochor. Between 1877 and 1882, he studied at the Academie des Beaux-Arts under Christian Griepenkerl, Karl Wurzinger, and Carl of Blaas. Zatzka was able to earn a living through the production of frescoes for churches and other institutions.

In 1885, Zatzka was commissioned to create the ceiling fresco The Naiad of Baden at Kurhaus Baden.

Many of Zatzka’s works were religious paintings and altar pieces dedicated to various churches in Austria.However, he is more known for his paintings of women, fairies and other fantastical scenes. Often, he would draw inspiration from the works of Richard Wagner and the fairy tales of the Brothers Grimm.

In the late 19th and early 20th century, several pieces by Zatzka were photographed and made into commercial and collectable postcards.

Within the 1920s, Zatzka’s style became the decor of choice throughout Europe. In addition, the previous thirty years held a resurgence for Zatzka.

Currently, most of Zatzka’s paintings reside in private collections.

Legacy
In 2004, Somalia created stamps with four Zatzka motifs: a harem dancer, a few nymphs, a spring goddess, and the night sky.