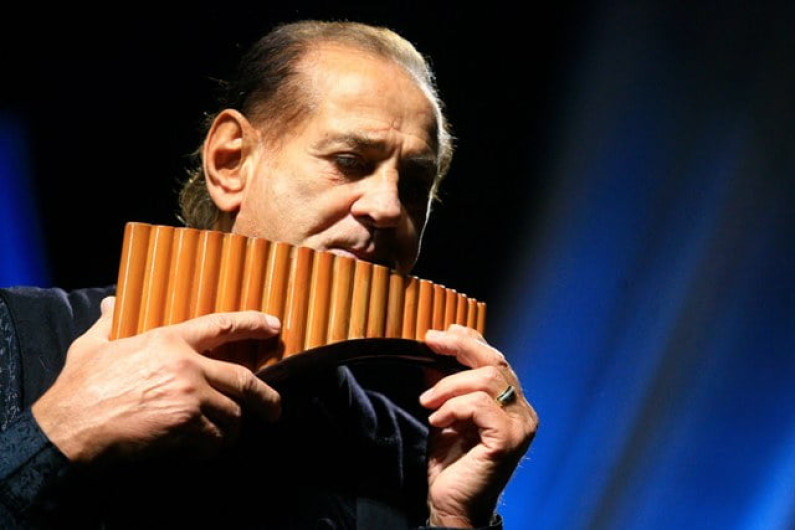 Zamfir is known for playing an expanded version of the traditional Romanian-style pan flute (nai) of 20 pipes to 22, 25, 28 and 30 pipes to increase its range, and obtaining as many as eight overtones (additionally to the fundamental tone) from each pipe by changing the embouchure.

He is arguably known as “The Master of the Pan Flute”.
Zamfir came to the public eye when he was approached by Swiss ethnomusicologist Marcel Cellier, who extensively researched Romanian folk music in the 1960s.

The composer Vladimir Cosma brought Zamfir with his pan flute to Western European countries for the first time in 1972 as the soloist in Cosma’s original music for the movie Le grand blond avec une chaussure noire.

This was very successful and since then, he has been used as soloist in movie soundtracks by composers Francis Lai, Ennio Morricone and many others. Largely through television commercials where he was billed as “Zamfir, Master of the pan Flute”, he introduced the folk instrument to a modern audience and revived it from obscurity.

In 1966, Zamfir was appointed conductor of the “Ciocîrlia Orchestra”, one of the most prestigious state ensembles of Romania, destined for concert tours abroad. This created the opportunity for composition and arranging. In 1969, he left Ciocîrlia and started his own small band (taraf) and in 1970 he had his first longer term contract in Paris.

He changed the composition of the band soon after: Efta Botoca (violin), Marin Chisar (flutes), Dorin Ciobaru and Pavel Cebzan (clarinet and tarogato), Petre Vidrean (bass) and Pantelimon Stînga (cymbalum). It is said that this change was made to increase the command of Zamfir and have more artistic freedom.