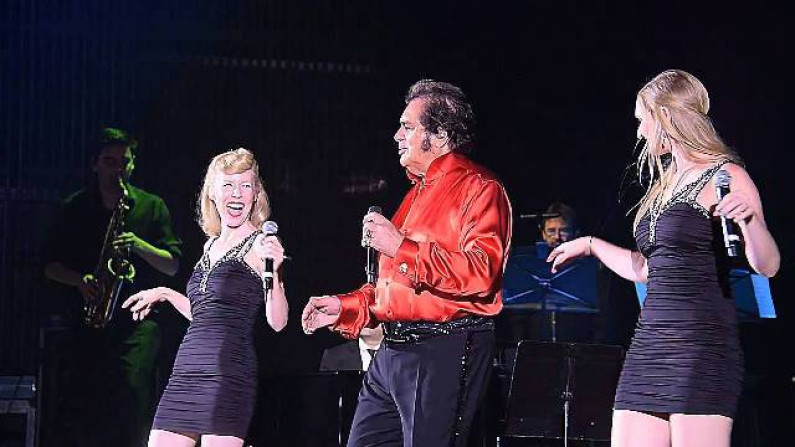 Engelbert Humperdinck (born Arnold George Dorsey; 2 May 1936) is an English pop singer. He is best known for his songs “Release Me” and “The Last Waltz”, both singles topping the UK music charts in 1967, and selling in large-enough numbers to help the singer achieve “the rare feat of scoring two million sellers in one year.”

In North America, he is also known for his 1976-hit single, “After the Lovin’.” Humperdinck is regarded by music critics to be “one of the finest middle-of-the-road balladeers around.

Humperdinck’s recording career has continued into the new century, with new albums and a range of musical collaborations. In 2000, he hit the top five of the British album charts with Engelbert at His Very Best, and returned to the top five four years later, after he appeared in a John Smith’s TV-advertisement.

In the spring of 2003, Humperdinck collaborated with Grammy Award-winning artist-producer Art Greenhaw to record the roots gospel album Always Hear the Harmony: The Gospel Sessions; joining Humperdinck on the album were The Light Crust Doughboys, The Jordanaires and The Blackwood Brothers.

The critically acclaimed album was nominated for a Grammy for “Best Southern, Country or Bluegrass Gospel Album of the Year”, while Humperdinck was photographed with generations of fans at the 2004 Grammy Awards in Los Angeles. He was back in the studio soon after, releasing Let There Be Love in 2005.

Music critics have remarked on the historical span of material in the album, from songs first made popular in the 1920s to more recent ones from the 1990s, and point especially to Humperdinck’s version of Nick Lowe’s “You Inspire Me” as a noteworthy cut.

In 2007, Humperdinck released The Winding Road. In a conversation with Larry King, Humperdinck discussed the genesis of the album; he pointed out that The Winding Road featured songs exclusively by British composers, as a “tribute to [his] home country”, released as it was to mark 40 years since his first international hit recording.