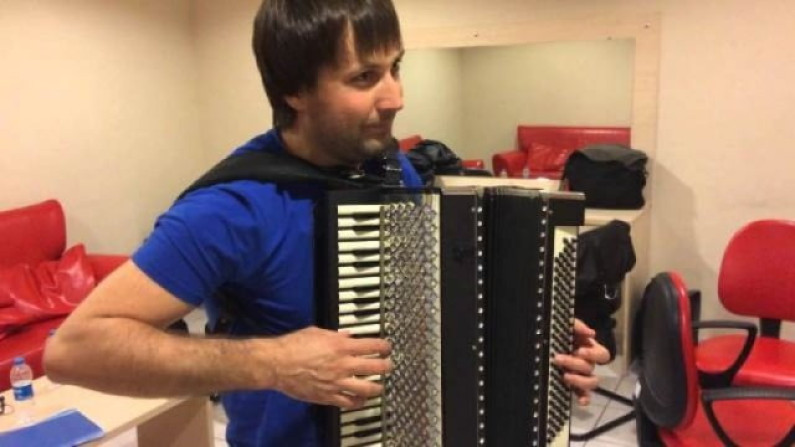 After graduation at the Art Institute of the Adyghe State University in Maykop, he performed as an accordionist with the Adygean State Folk Song Ensemble – Islamey. He is one of today’s best-known Circassian folk musicians.

The music of Adygea has a long history. Adygea is a republic in Russia. The Republic’s national anthem was written by Iskhak Shumafovich Mashbash; music—by Umar Khatsitsovich Tkhabisimov.

Recorded Adygean music began prior to World War I, when folk musicians across the North Caucasus and Central Asia were commercially recorded. Many of these musicians, including the Adygean Magomet Khfgfudzh, an accordionist, have become cultural heroes to modern inhabitants.

Adygean music is closely related to Kabardian, Cherkess and Shapsugh music. The four groups are the main constituents of the Adiga (Circassian) nation. In the olden days, the musical lore was preserved and disseminated by the roving minstrels (Jegwak’we).

Aslhencheriy Nexay, People’s Artist of the Russian Federation, graduated in composition from the Tbilisi Conservatoire in 1983. He composed the first Adigean opera ‘The Sound of Distant Thunder’ and wrote a number of songs and symphonies.

He founded the Adigean State Folk Song Ensemble Islamey («Ислъамый») in 1991. It is one of a number of folk song groups that keep the old bard traditions alive, boasting of a rich repertoire of ancient and traditional songs.

The Ensemble’s mission also includes the rearrangement of folk songs and chants into modern formats to bestow contemporary relevance on them without sacrificing their authenticity and historical value.